It is often said that Christians should avoid Christmas and Easter because they have historical connections to pagan rituals. However, because 1 Cor. 8-10 tell us that it is OK to eat the meat that pagans have sacrificed to demons, it naturally follows that whatever the pagans have done in any other ritual should not influence us either.

Regarding the meat sacrificed to idols –

These verses quite clearly tell us that we are free to eat the meat that the pagans have sacrificed, however, a letter to the Gentiles seems to contradict this, telling them “to abstain from food polluted by idols” (Acts 15:19-21). The reason for this letter was to keep the peace with the Jewish Christians who, all their lives, had been under the law of Moses as v.21 tells us: “For Moses has been preached in every city from the earliest times and is read in the synagogues on every Sabbath”. The Jews had always followed the law of Moses, eating the meat which they had sacrificed on the Temple altar in worship to God. For this reason, they thought that if they ate the meat that the pagans had sacrificed to idols then they would be participating in the worship of pagan gods but Paul said that meat and idols are nothing (1 Cor. 10:18-19).

The apparent contradiction is further cleared up by 1 Cor. 8:4-13 and 1 Cor. 10:27-33 which tell us that we should not eat sacrificed meat if it upsets the conscience of a weak brother. 1 Cor. 8 says that stronger Christians, having the knowledge that idols are nothing, knew they had the freedom to eat this meat (vs.4-9). However, if a weak brother without this knowledge saw a stronger brother eating it then he may be led to think that he is taking part in sacrificing to idols and be encouraged towards idolatry; his conscience would become defiled (v.7) and he would be destroyed (v.11). For this reason, this meat should not be eaten in front of weaker believers as it can cause them to fall. Even though the meat is nothing but food to stronger believers, it may a stumbling block to the weak so we should avoid eating it in their presence (vs.9-13). So, the instruction not to eat meat sacrificed to idols, in (Acts 15:19-21, is for the sake of weaker Christians and does not contradict the verses which tell us that we have freedom to eat it (1 Cor. 8:4-9 and 1 Cor. 10:27-30).

So, regarding Christmas and Easter, it can be seen that what the pagans have done in the past, or are doing today, should not influence us and we should not fear these celebrations any more than we fear eating meat that others have sacrificed to idols. Celebrating Jesus’ birth and death by having a Christmas tree or an Easter egg is not participating with demons despite anything the pagans may have done throughout history. Christmas trees, like idols, are dead things; they are nothing.

Regarding Isa. 44:12-20 and Jer. 10:3-5, these verses have nothing to do with worshipping under trees; they merely talk about idols made from the wood of trees and men bowing down to blocks of wood. The issue is not about trees but about worshipping idols which happen to be made from trees.

From these passages, two things are clear –
(1) We have the freedom to choose in these matters and
(2) We should not allow our choices to cause a believer to stumble.

Rom. 14 tells us that nothing, including a Christmas tree, is unclean in itself but if someone regards something as unclean then it is unclean to him so he should avoid it. Also, this chapter tells us not to judge one another regarding eating, drinking or sacred days and rather than judge in these matters we should seek to be loving and peaceful. So, instead of being divisive over these disputable matters, v.22 says, “whatever you believe about these things keep between yourself and God”.

This article can be downloaded as a PDF or an MP3 from –
http://www.christianissues.biz/downloads.html
The video of “Christians And Christmas” can be seen on YouTube at-
https://www.youtube.com/watch?v=l5KJ3KvuoSI

Christian Issues’ blog can be subscribed to at –
http://www.christianissues.biz/blog/wordpress/feed/ 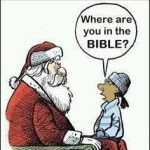 The question really becomes What is the truth about these festive days celebrated by christians and non-Christians the world over, and does God want us to keep them? Are we warned about these religious traditions of men in scripture? Answer is absolutely, Yes. Do these days have anything to do with God? Answer is absolutely, No. Why? The answer will likely astound and shock you. Lets focus for now on Christmas….  the pagan worship day.

Foremost there exist not a single verse in the entire bible, Gods Holy word which teaches nor instructs us to keep this day holy, nor celebrate it, in fact we are warned not to keep it.

We can study and research historical facts. When the christians grew in numbers in the roman empire, they became a very large and influential part of the society at that time.   It is a fact that Constantine the ruler of the roman empire made a political decision to appease the christians and pagans people by combining their worship days around 312ad to embed his powerful position in the empire. It is also fact that originally the 25 December was a pagan holy day…which had been the day of pagan sun worship (son of baal), and how the influence of the pagan Manichaeism. Many Christians in Mesopotamia protested against this idol worship day but to no avail.

It appears that Christians did not observe this day until satans church of old, the catholic church in the 4th century AD made it a day to be officially observed by decree. Satan got to work. To embed the doctrine to worship mary in place of Jesus, the birth of Jesus became a ‘holy’ day, by the wicked decree of the ‘mass of christ’ which outwardly is the ‘celebration of his birth’ and inwardly in truth was the celebration that Jesus was crucified… pure wickedness and evil in design. This came enhanced by the ‘saint Nicolaus’, the santa claus, the elves, the mistletoe and the bearing of gifts. This has become now the largest ‘christian’ festival commercially the world over till today…

Now according to scripture Jesus Christ was born either 3 or 4 BC in the first week of October. That not being enough what about the traditional presents. King Herod, a wicked king sought to kill the baby Jesus he heard would be born and sent his 3 wisest men with customary gifts to seek the baby child and have it reported back to him. We know Gods holy spirit intervened and after the 3 men encountered the baby child went on their journey and returned not to the king. So much more proving the farce of this ‘christian worship day’.

There is a tragic  ‘cherry’ on top in its evil design, it gets people (as created by the evil catholic church) to brake one of the commandments of GOD. Consider a young christian newly married couple telling their child (ren) about Christmas. When these children reach a certain age they learn their parents have lied to them! Whilst going to profess their beliefs, their Christianity, their importance of their faith …. the children learn their parents are hypocritical liars and cause much pain and confusion on the entire christian belief; us putting aside it is a purely religious tradition and has nothing to do with the GOD Yashua of the bible.

As a believer and professing to follow Jesus Christ, I sincerely hope anyone reconsiders these verses very carefully, in case you reject all I state above:

Now understand very carefully if the Lord wanted us to celebrate his birth it would not have been hidden from the believers!
Let us thus now know what did Jesus Christ who is GOD actually teaches us do to in such remembrance of Him, there is a verse in holy scripture which says the following from the mouth of GOD where we read in 1Co_11:24  and giving thanks, He broke and said, Take, eat; this is My body which is broken on behalf of you; this do in remembrance of Me.

This is what GOD tells us even 3 times! so we don’t get it wrong…. What are you doing with your will of worship…. follow the world or follow Jesus Christ? YOU choose wisely my beloved.

The pagan traditional day was ‘the day of the sun’ as celebration of the death and return of the sun, and was suggested to become to make Christian theology more acceptable to Pagans and the date of the first sunday of the spring equinox. This became the dates set to appear to the christian people to be the day the Lord was resurrected.

Most reliable appears to be originally the celebration of Ostara the fertility goddess of those days. So what is the origin of pagan easter? About an ancient god tamuz, (a story about never-ending cycle of  life without direction and purpose) and this god died every year beginning of winter and was resurrected by the goddess ishtar in spring. Note ishtar and easter?

What will astound even more is that this worship day is nowhere to be found in scripture.

Why do you observe such things?

Ponder on this verses, which say:

Mat 7:22  Many will say to Me in that day, Lord, Lord, did we not prophesy in Your name, and in Your name cast out demons, and in Your name do many works of power?
Mat 7:23  And then I will declare to them, I never knew you; “depart from Me, those working lawlessness!” Psa. 6:8

With much love and care and hope, may the truth set you free…Amen