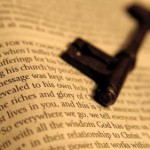 In the Bible, God repeatedly describes the nature of the sin of the church. Much that is unbiblical goes on in congregations and denominations today. This is not apostasy in sects and cults, which obviously are under the power of Satan; rather, it is in evangelical, Bible -related churches. To our utter consternation,  these sins apply to a high degree to many of the most conservative contemporary churches and  denominations.

.
In the Bible, we can learn how God plans to eventually destroy the New Testament church as it
becomes increasingly sinful. It will be by satanic activity working through false gospels that look so much like the true Gospel that even the elect would be deceived, if that were possible…..   (for it is not as they have the holy spirit within them)

The Bible discloses that right near the end of time, Satan will become the dominant ruler within the congregations. In II Thessalonians 2, God speaks of the man of sin taking his seat in the temple. It will  be seen that the man of sin can be only Satan.

We read in Matthew 24:24: “For there shall arise false Christs, and false prophets, and shall show great signs and wonders; insomuch that, if it were possible, they shall deceive the very elect.”
In Revelation   13:7, God informs us:  “And it was given unto him to make war with the saints, and to  overcome them: and power was given him over all kindreds, and tongues, and nations.”
Revelation 13 speaks of the beast that comes out of the earth. This can be only Satan and his dominion,  as he rules through false gospels. By this means, he is able to destroy the churches that are under the judgment of God. Thus, he is able to overcome the saints, the true believers, within the congregations.

Why does God write extensively in I Corinthians 12, 13, and 14 about the
phenomenon of tongues? One might be surprised to read in the Bible about this temporary phenomenon.
A few decades after this phenomenon occurred in the church in Corinth, the visions of the Book of Revelation were received by the Apostle John on the Island of Patmos.
The Book of Revelation closes with the warning that anyone who adds to its words will be subject to plagues; therefore, there can be no further revelation from God by visions, voices, tongues, or anything  else. Thus, the phenomenon of tongues that occurred in the church at Corinth would also have come to  an end. From that time to the present day, do not expect God to bring a message by these means or by any means other than what He has given us in the Bible.

An ever-increasing number of individuals and congregations all over the world fail this end -of-time program. The tongues movement, part of the “charismatic movement,” is sweeping through
like wildfire. The “charistmatic movement” was started by the wickedness of freemason billy graham and many followed his directives under satan. Virtually every denomination has churches that have welcomed it with open arms. One of these gospels in the supernatural occurrence of tongues, which is found in most churches today and many pastors and preachers use it and encourage it. The church has become increasingly  apostate.
Consequently, God is blinding people so that they believe this movement is of the Holy Spirit. They do  not realize that it is of Satan. By means of this phenomenon, Satan appears to be defeating the true  Gospel to a degree never before realized.
The  second  characteristic of the tongues movement is an interest in signs and wonders. There is a conviction that God is performing miracles today, as our Lord and the twelve apostles did signs and wonders. Miraculous healing is most commonly expected. The sign of people falling backward (being  “slain in the spirit” as some call it), is evidence of a supernatural event. While so-called miraculous  healing can be explained in earthly, physical terms, falling backwards appears to be unexplainable from  an earthly, physical vantage point.

When God is ready to destroy this earth by fire and create new heavens and a new earth, He will bring  judgment on the churches that have become increasingly apostate. God utilizes Satan for this dreadful  task even as He used the wicked nations of Assyria and Babylon to destroy ancient Israel. Satan will not  be the final victor. When Satan thinks he has won, God will bring him into judgment. Revelation 20:9 and the end of time will come… Glory to God.

Jesus Christ says I will send you the comforter the Holy Spirit.   That is what we are to TRUST.

God warns so lovingly…..be not deceived by no means My children by no means……

Shalom and be blessed of truth and Gods