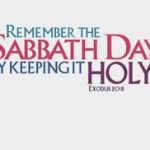 Religiosity by man dictated from early on, to comply with God’s law to observe the Sabbath, as  is commanded by God. In many churches they try set themselves apart by adhering to their understanding and doctrines, however in truth they all fall short of scriptural truth and obedience, and in fact satan uses this to divide many, which over the years created many millions religious Christian followers and very few true believers. In fact even many church leaders even claim that their doctrines sets them apart and they are following the ‘true’ path or paths which led to many sects, thus confusion and great deception.
When Jesus walked on earth, Him being God, perfectly knew He would issue, ordain rather, in, a church age, which started in AD33 and ended about 40 years ago. This church age would establish churches whose main task was to bring the Gospel into all the world. Sadly in this time we have seen great division, many killed for their ‘faiths’ even and establishment of denominations and many differing gospels, unlike the one Gospel of Jesus Christ.
So when is the new testament Sabbath ? commanded to be observed until the end of time, in fact even spoken to
and referred to specifically in an elaborated command as one of the 10 commandments. We all understand the old testament Sabbath, carefully observed on the 7th day, the Saturday, specifically as the Friday sunset to Saturday sunset.

Jesus, who is God, changed the Saturday Sabbath to the sunday Sabbath, this occurred when He said ‘It is done’, which heralded His divorce from national Israel, which we know for the ‘curtain of the temple was torn’ as we read this in verses in mark and luke. As prophesied He spent 3 days and nights in the ‘heart of the earth’ and obeying His own law observed the last old Sabbath, and rose on the 1st day which is sunday.
This is where He ushered in the new Sabbath days to be observed, however the bible translators made great error, for their lack of understanding and translated the bibles with their ‘own understandings’ from the original greek tongue. GOD teaches the understanding student to study the original words which come by Him. In fact this truth so few comprehend or understand is so fundamental to the sanction which He gave the churches during the past church age, that it is repeated even, in order to establish absolute certainty and foundation.
Go and read and study all the accounts when mary went to the tomb of the Lord. Jesus, even introduces the new Sabbath, by telling us beforehand the following; that the Sabbath was established for man and that He himself is Lord of the Sabbath also, as we read that in Matt 12v8.
To prove this absolute perfect truth, study all the related verses in matthew, mark, luke and john.
I quote one of the related verses, to study diligently, as is commanded, which says this:
KJV  Mat 28:1  “In the end of the sabbath, as it began to dawn toward the first day of the week, came Mary Magdalene and the other Mary to see the sepulchre.”
However the translators incorrectly translated the verse(s), for as we read, I translate from the original greek tongue to English, as in a literal translation, and this is where the TRUTH lies.
Mat 28:1 actually says this “But late in the Sabbaths, at the dawning into the first of the Sabbaths, Mary the Magdalene and the other Mary came to gaze upon the grave”
READ and STUDY carefully the WORDS which came by the mouth of GOD, ‘late in the Sabbaths’ (the old Sabbaths) at the ‘dawning into the FIRST if the SABBATHS’  which PROVE perfectly that Jesus who is GOD, established the Sunday as the NEW SABBATH and this is perfect TRUTH.
I hope this helps those who seek biblical truth, for it cometh by Him alone, In Christ our beloved Lord and Savior.
Carefully also understand the added emphasis God made to keep the Sabbath AND ‘to keep it Holy’ for the new testament Sabbath to be understood to observed the entire DAY during the past church age, and not merely during ‘church hours’, and then thereafter go on as if it where a normal day…..

This is a brief summation, and do not hesitate to ask any questions.